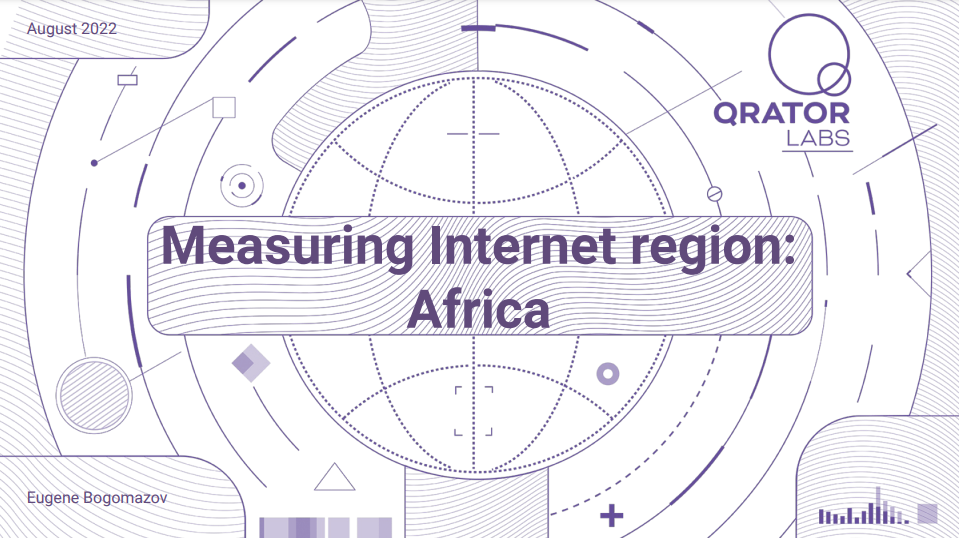 The video of this presentation  is also available at https://livestream.com/internetsociety/afpif2022/videos/232635696.

First of all - why do we care? I work for Qrator Labs, a DDoS attacks mitigation company, and we have our own BGP anycast network. Also, I represent the Qrator.Radar project, where we have a BGP collector with more than 800 points of presence - so we have the BGP data to create a BGP monitoring tool, and also it allows us to conduct further network research.

Lastly, as Qrator.Radar, we participate in the IETF activity to make the BGP protocol more secure and safe.

What will this presentation be about? First, we will discuss our measurements: what and how we are trying to measure.

Then we'll look at a few simple yet powerful general metrics we've chosen to highlight. After that, we will consider the specific metrics of the stability of the region's network in the event of a single point of failure. Later we will discuss some of the BGP incidents, particularly how often BGP attackers violate your address space. Finally, we will try to figure out what happens when you enter the IPv6 world.

First, let's talk about what we are trying to measure. 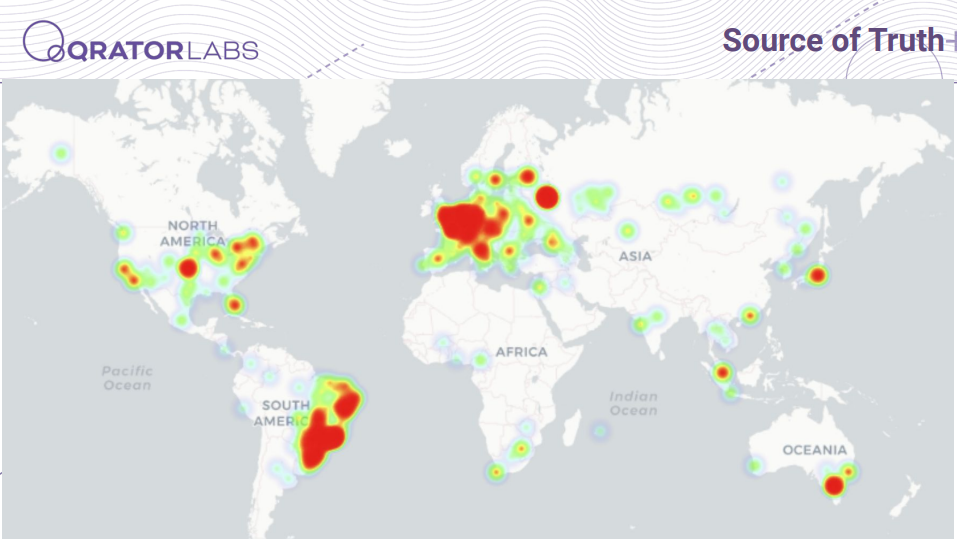 As I mentioned, we have our own BGP collector, and you can see all our observation points on this heatmap. This BGP data is the primary source which allows us to make conclusions and conduct research. And I think you already see a little problem with this map - even if we have several hundreds of BGP sessions, we have only 15 observation points in Africa. 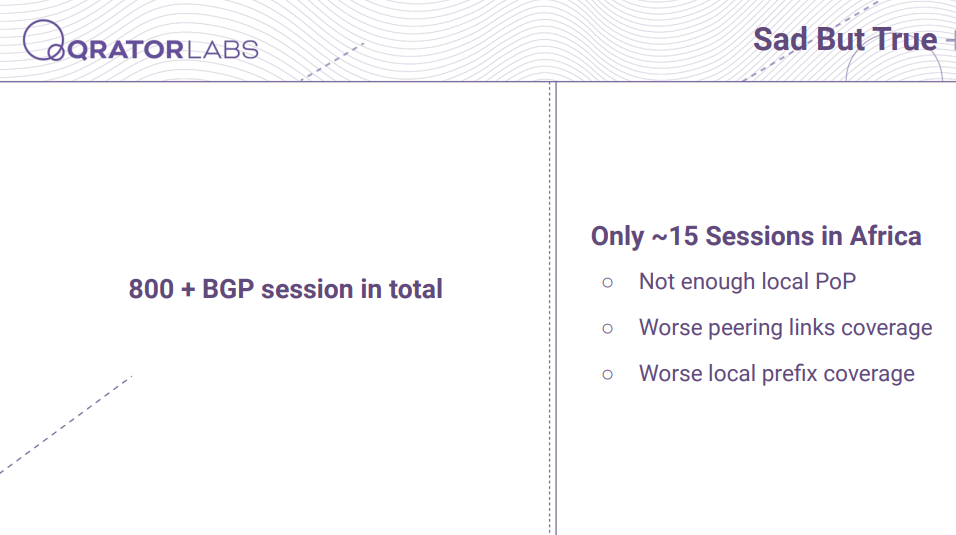 So, what is the problem? In Africa, there are around 50 IXPs, and many local routes can be seen only on these IXes; they don't traverse to the Tier-1s and, therefore, to different parts of the world. We (in Qrator.Radar) can't see these routes as we don't see local peering and thus do not consider such peering links at the later steps.

But we could use what we have, and so we will use related data from other parts of the world.

Also, when talking about BGP data, we see prefixes and AS paths. So, to get a description of ASNs, we use IRR databases. To obtain information about to which country a given ASN or prefix belongs, we use geo community services such as MaxMind and others. And when we are talking about prefix violations, there are two types of objects indicating legitimate owners of the address spaces: Afrinic IRR for route objects and RPKI storage for RPKI/ROA objects.

When we talk about ranking, we have a problem. Because the network is a graph, there are too many ways to figure out which nodes in the graph are important. Therefore, we need to find a subset of these metrics, that is, from one point of view, simple enough to understand but, from another point of view, powerful enough to describe what is happening with the region as a whole. 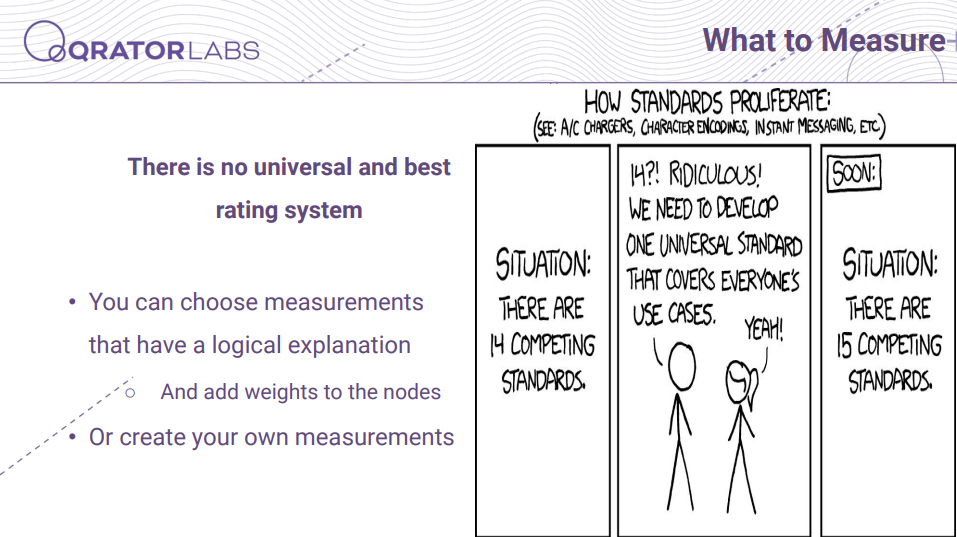 First, we'll look at the most common ones, present our metrics, and describe what they are measuring and why they are essential.

Let’s take a look at the general metrics.

Here you can see statistics on the registered ASNs, announced ASNs and announced prefixes.

Looking at the results, we can find that South Africa, Nigeria and Kenya came out on top by a significant margin. It was already said at this conference what the reasons are: in these countries, there is a growing market, and over the past few years, there have been many new operators trying to provide their services in these countries.

But there are 54 countries to display, so how do we decide which subset of the total data we want to show? So, for the rest of this presentation, we'll talk about countries that rank in the top or median places, emphasizing how a region ranks in this indicator. 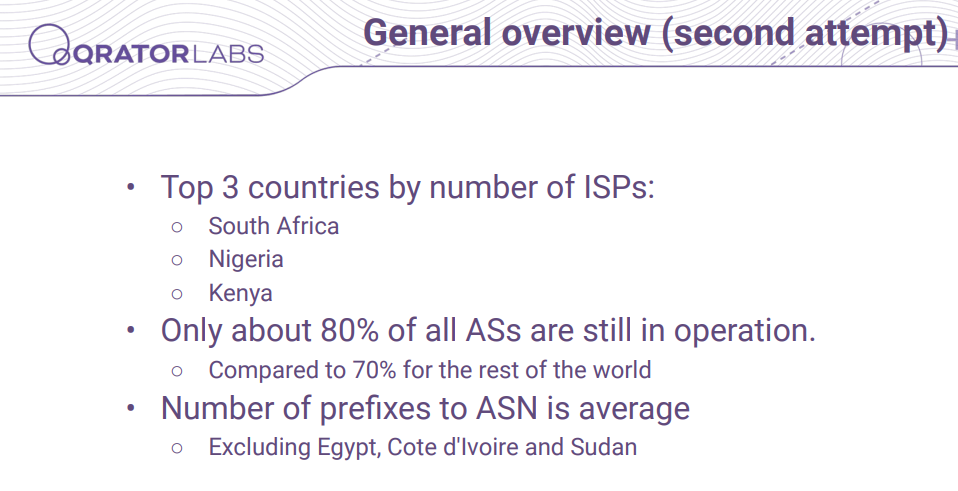 Also, I want to highlight that the above top 3 countries have more than half of all ISPs in the region. So when something happens with these countries, it could affect the region and thus influence the whole continent.

We looked at the total number of ISPs, but ISPs can vary and play different roles. First, as an operator, you can create your own ASN to provide local services to your local customers/users, such as banks, universities, or any other organization. You have to buy a network prefix, announce it, and don't care how the network works. And there is another part, a specific role - the transit network, whose task is to connect these local operators with the rest of the world. 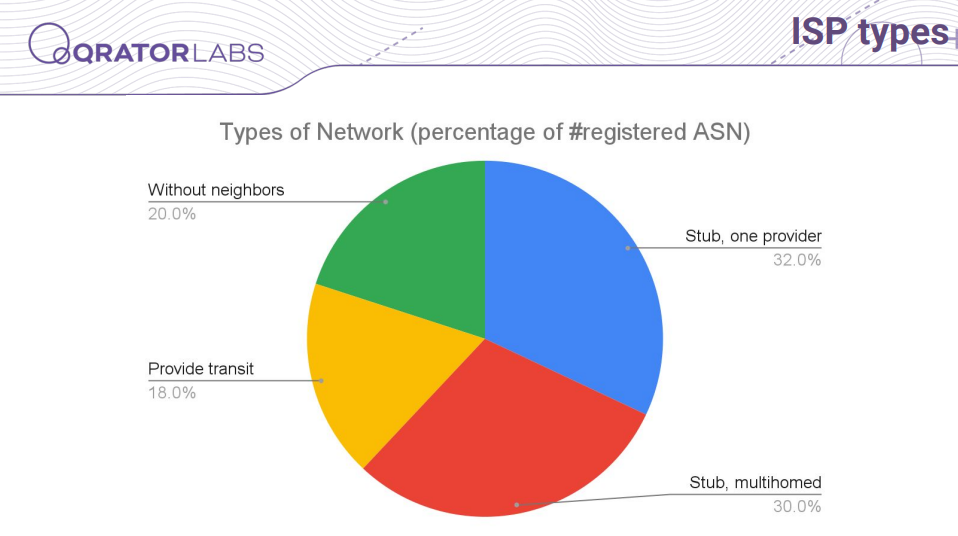 Let's take a look at the pie chart, with the help of which we will find out that the first type of operator is the most common. They occupy ¾ of all the active ISP's space. So the number of transit operators is relatively tiny, but they play a massive part in Internet health.

Who are the most significant transit operators on the continent? Of course, we got to name some of the Tier-1s: Cogent with a considerable lead, then Telia and Level3. But we cannot look exclusively at the Tier-1s, some big Tier-2 operators interconnect the region from the inside, and they cannot be found by a consumer cone or a similar metric. So we need to design our own metric to highlight how they are critical to the region. 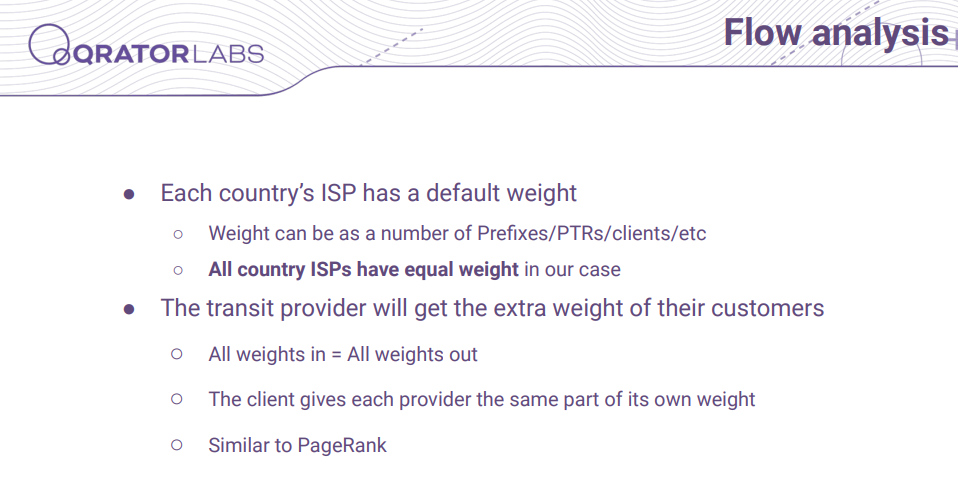 So, to create a new metric, we will make two assumptions. First, we will consider all of the country's ASNs equal and give them a similar weight. And the second assumption is that the transit provider equally distributes all of his weight to all outgoing provider sessions. So everything is equal, and providers are identical, which is simple enough. And now, let's take a look at what result these assumptions give us.

Of course, we will see Seacom, which provides cable interconnection in Southern and East Africa. Liquid technologies, a participant at AfPIF (and the only company connected West to East by land) and West Indian Ocean Cable Company - WIOCC.

In the West, Mainone takes the lead with Dolphin Telecom. 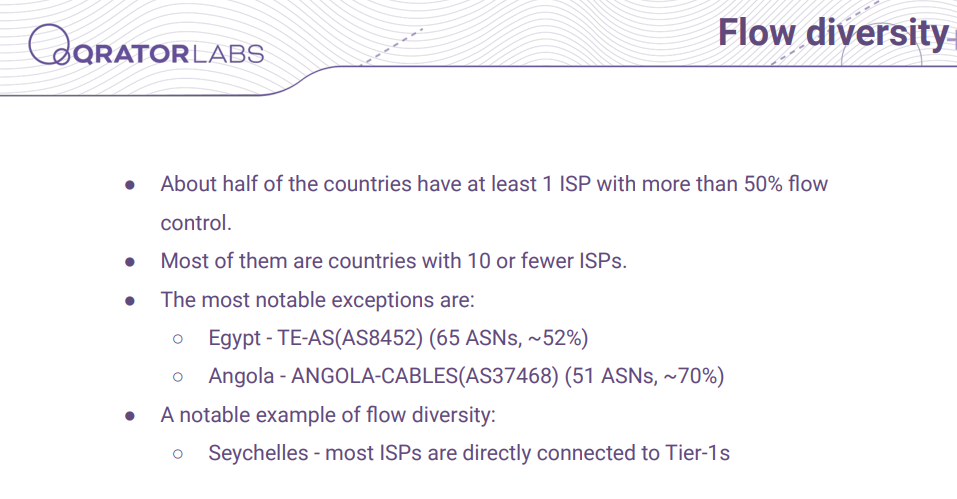 What about other countries? Most African countries have 10 or fewer active ISPs. That is why you can always find one transit operator that will control more than half of the whole traffic for a given country. The most notable exceptions are Egypt and Angola with Angola Cables ISP.

On the other hand, there are Seychelles, whose ISPs are directly connected to the Tier-1s. And none of the Seychelles ISPs has more than 10% of the country’s traffic under control.

So what will happen with TE-AS and Angola-Cables if they go offline? How stable will the region remain?

To explore this area, we created our own metric and modeled this situation precisely. 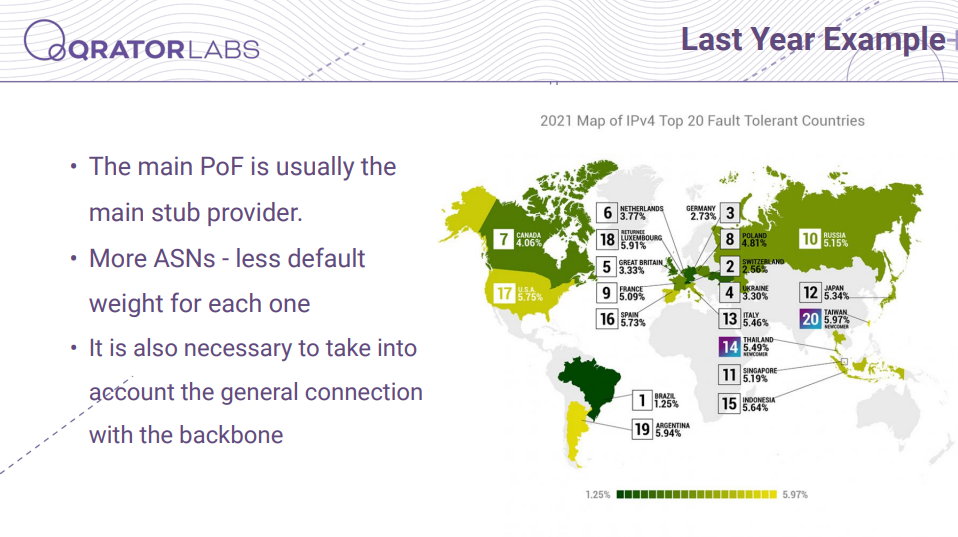 We’ve made some discoveries during several years of conducting reliability research. 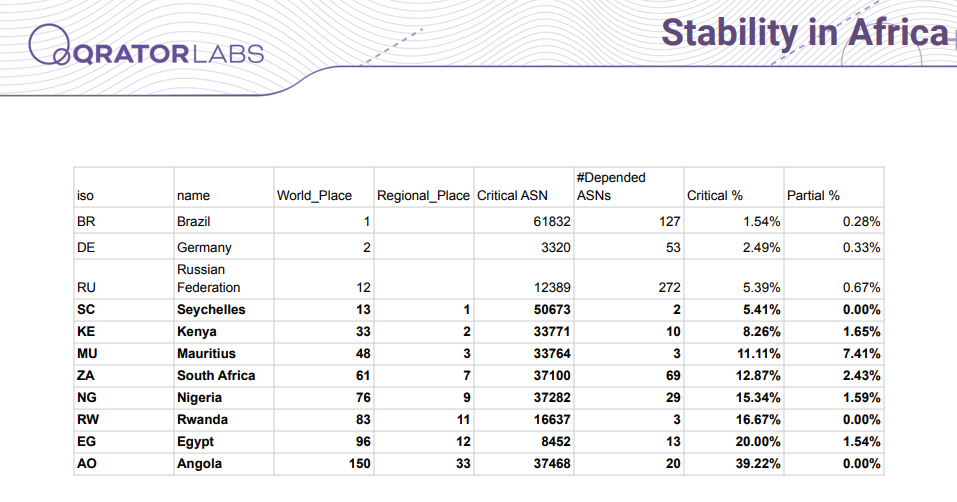 Reliability statistics, where we show a place in the global and regional rating, critical ASN and a percentage of intrastate resources that would be rendered offline in case of AS failure as the Critical %.

As expected, countries trying to create and grow corresponding local telecommunications markets are among the top, such as Seychelles, top-3 African markets we already mentioned and Mauritius.

And as for Egypt and Angola, such a high order of control of the country’s traffic could result in a considerable part of the region being cut off from the Internet (or, in this case, global transit) if TE-AS or Angola-Cables go offline. 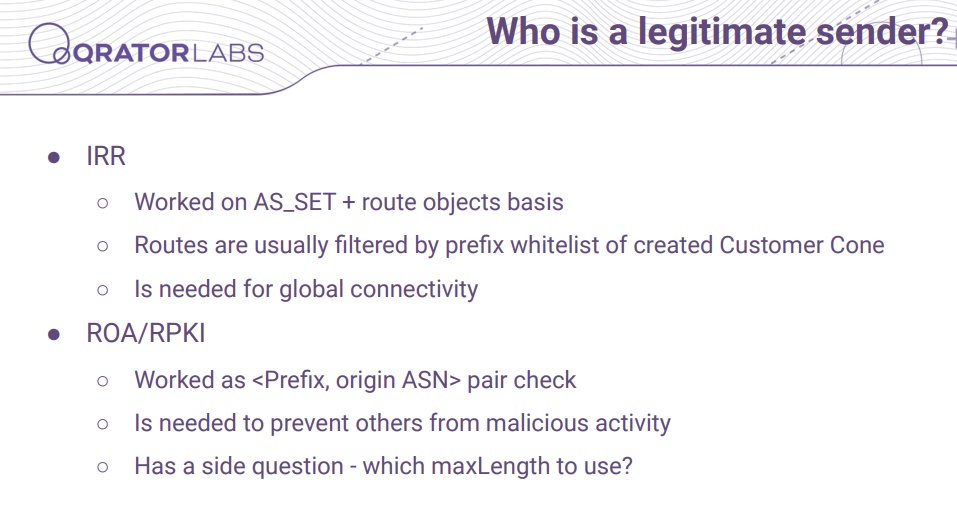 When we talk about prefix violations and BGP hijacks, there are two types of legitimacy-stating objects that we must take into consideration: route objects and ROA objects.

They can give you different validation statuses of the routes based on this information, and it is a common practice to drop invalid routes. 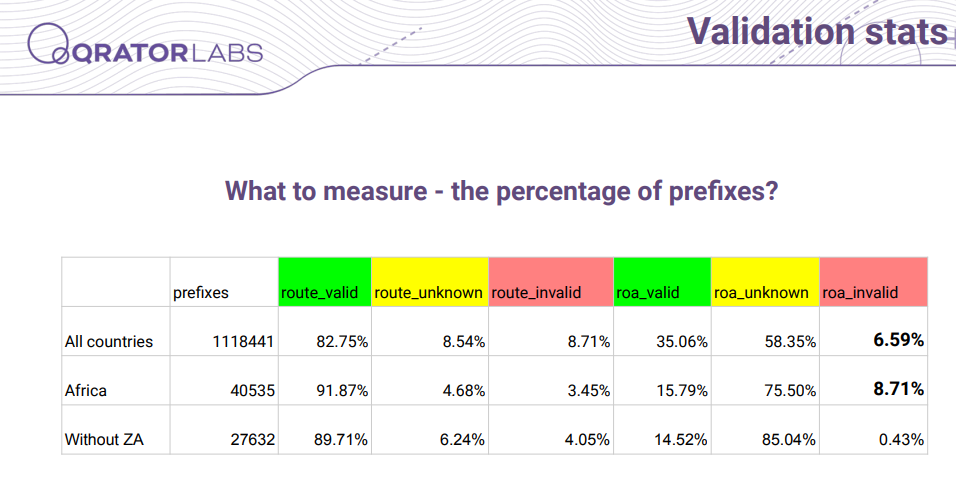 If we look at what is happening in the African region regarding the validity of objects, we can see that the number of ROA invalid routes is bigger than in the rest of the world. But if we take South Africa out of the equation, it will remain relatively low. How so? 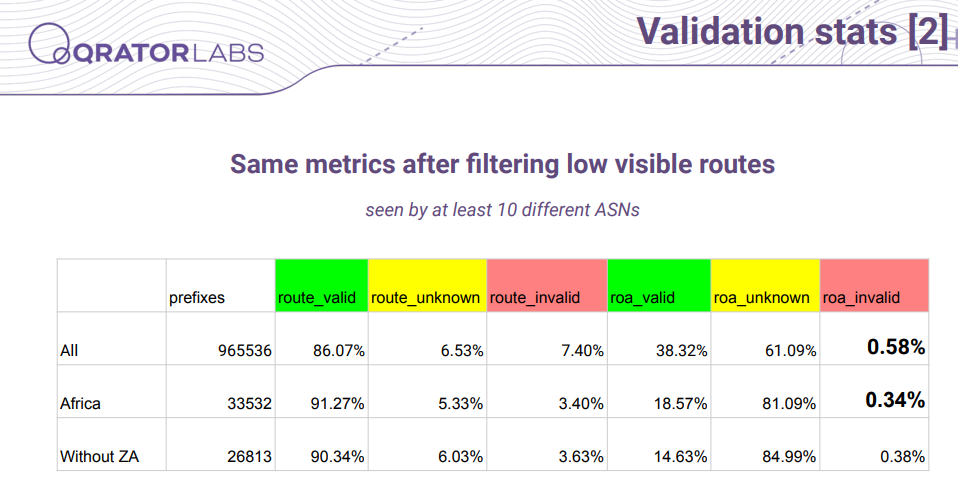 If we filter these routes out, we will receive a much brighter picture and this type of analytics we will count on and see that currently, around 20% of routes are signed with ROA objects. It is good enough, but still not as high as in the rest of the world.

Link from the slide.

There are several problems around the BGP hijacking - therefore, you need to scrub the data to have accurate results.

And if we talk about the IPv6 adoption rate, only ⅓ of all the ISPs are currently trying to provide IPv6 services. 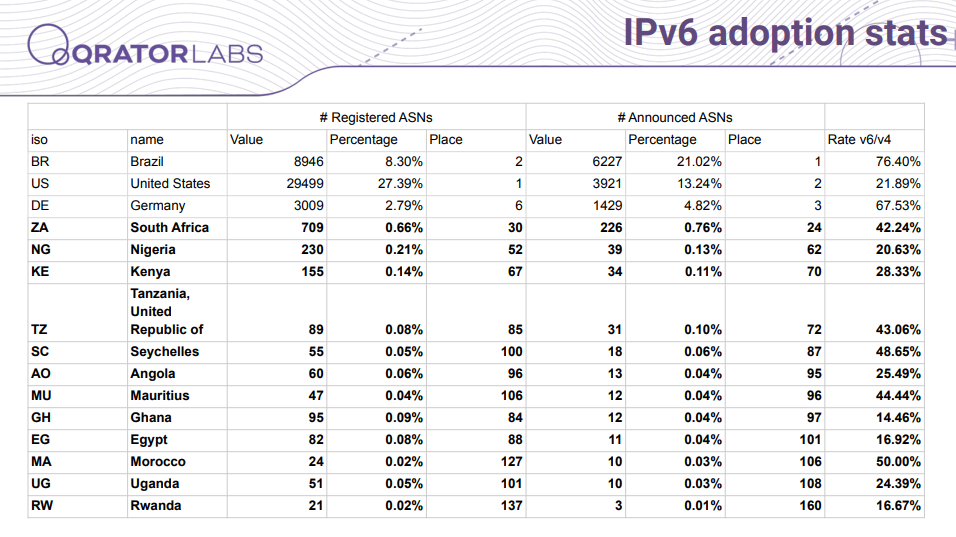 Statistics on the IPv6 adoption in the region and the world's leading countries.

Of course, among the top players are countries that we expect to be there. Here you can look at some of the results for these countries.

And if we highlight the main differences in IPv6 - the leading Tier-1 provider changes from Cogent to Hurricane Electric because it tries to be present on every IX and beyond those. Also, let's say you're trying to become a big player in the IPv6 world. In this case, you should support as many providers and peers as possible. Because of this diversification, other big players have less control over the total region flow.

As a final remark, I should say that we will try adding different types of analysis to the data to highlight local features in the future. One of them is the massive presence of IXPs, and the difference created by the coastline and landlocked countries. And, of course, we want to include your ISP knowledge of the region in our future region overviews. 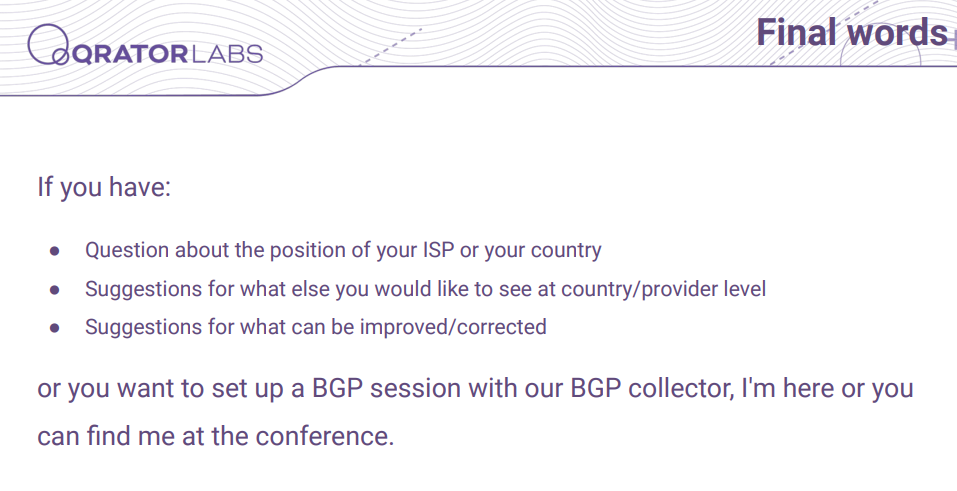 If you have any questions about what is going on, what’s your position if not seen in the presented charts, or you have any suggestions on what could be improved and what you want us to measure, you can find me here or write us an email at radar@qrator.net.