Hello and welcome back to the regular cyber and infosecurity letter! This time we are going through the relevant articles published 8 - 14 February 2021. 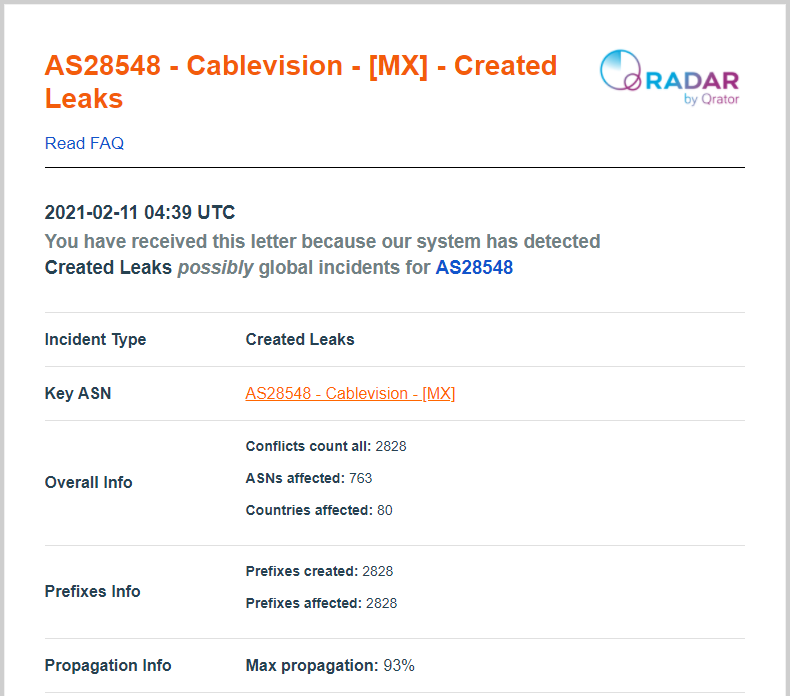 Greetings, fellow subscribers! As usual on Sundays, we are back with the most relevant and interesting articles published between February 1 and 7, 2021.

Welcome back to the cybersecurity newsletter! This time, we are looking at the two weeks of the most relevant stories starting with January 18.

January 27 of the year 2021 was marked with quite a peculiar route leak. AS61666 - GLOBO started announcing prefixes of its upstream provider MHNET - AS28146 to its another provider ALGAR - AS16735. In three minutes GLOBO leaked 1330 prefixes, and the whole routing incident lasted for 8 minutes - a time that was enough to create 1435 conflicts in 21 countries with 265 ASNs, mainly in Brazil (194 ASNs), United States (22 ASNs) and Venezuela (7 ASNs).

Welcome back to the regular cybersecurity newsletter brought to you by Qrator Labs! With this letter, we want to look back at the previous two weeks that started the year 2021 and pick only the most relevant stories.

At the beginning of the year 2021, Qrator Labs is celebrating its 10 year anniversary. On January 19 our company marks the official passing of a formal 10 years longevity mark, entering its second decade of existence.

Everything started a little bit earlier - when at the age of 10 Alex saw the Robotron K 1820 - in 2008, when Alexander Lyamin - the founder and CEO of Qrator Labs, approached the Moscow State University superiors, where he worked as a NOC engineer at the time, with an idea of a DDoS-attack mitigation research project. The MSU's network was one of the largest in the country and, as we know now, it was the best place to hatch a future technology.

That time MSU administration agreed, and Mr Lyamin took his own hardware to the university, simultaneously gathering a team. In two years, by summer 2010, the project turned out to be that successful. It courted the DDoS attack of a bandwidth exceeding the MSU's upstream bandwidth capability. And on June 22 MSU superiors gave Mr Lyamin a choice - to shut down or find money to incorporate.

Alexander Lyamin chose to incorporate with his own means, which effectively meant that the needed infrastructure must be built from scratch. The initial design should be distributed instead of concentrated within one network, which resources were not enough for this specific task. And by September 1, 2010, those first server sites were ready and running.

One would expect 2021 to start somewhat differently compared with chaos of the previous year. In Qrator.Radar, we also hoped for the better. Unfortunately, as soon as January 6 - today, we proved wrong.

Hello and welcome into the last letter on cyber and networking security for the year 2020!  We want to wish you a Merry Christmas and a Happy New Year.

Now let's take a look at the articles and papers covering the week of December 14 to 20.

Greetings fellow subscriber! This week we are going to scroll through the two-weeks events in cybersecurity, everything that happened between November 30 and December 13, 2020.